Helen Bradford Thompson was born in Chicago, Illinois on November 6, 1874. Her parents were David Wallace Thompson, a shoe maker and inventor, and Isabella Perkins Thompson, a homemaker and active missionary. Both parents believed education was important and saw to it that all three of their daughters went to college.


Upon her return to the States she acquired a teaching position with Mount Holyoke College, and by 1902 was appointed director of its psychological laboratory and professor of psychology. She left for Japan three years later to marry Dr. Paul Gerhardt Woolley, whose work was in the Philippines. They moved several times over the next three years, following her husband’s career. Helen was able to procure rather impressive positions despite all those moves, especially for her age and gender during those times. She was an experimental psychologist for the Philippines Bureau of Education, Chief Inspector of Health in Bangkok, and then returned to settle in Cincinnati in 1908 due to the birth of her first child.


She worked as an instructor of philosophy at the University of Cincinnati, from 1909 thru 1911 when she became the director of the Bureau for the Investigation of Working Children in Ohio, until 1921 when the family moved to Detroit where she worked as a psychologist on staff at the Merrill-Palmer school and became the Associate Director in 1922. In 1924 she accepted a position in New York as the director of the Institute of Child Welfare Research and professor of education at Columbia University’s teacher’s college thanks to a Rockefeller funding to create an institute for child study and parent education.

Her own life bore the brunt of the biases and oppressions of the time. After following her husband through many career changes and subsequent moves, she found herself left for a younger woman, alone to provide for her children. The dissolution of her marriage, a loss of a close friend, her own health, physically and emotionally deteriorated. While trying to cope with her personal crises, she was forced to resign from her teaching job at Columbia, and was never able to gain appropriate employment again. Due to the Great Depression and her private difficulties she lived the last 17 years of her life with her daughter and husband. She died in 1947 at the age of 73 from an aortic aneurism.
Relevance


Her accomplishments were great, especially for the times she lived. She was the first to research gender differences and proved the popular belief that women were inferior to men to be false. She conducted experiments in seven different areas of metal functioning: motor ability, skin and muscle senses, taste and smell, hearing, vision, intellectual faculties, and affective processes. Her experiments found no empirical evidence of female inferiority. Although her studies were held under strict research methodology, they were not widely accepted. Some reviewers went so far as to object to her results because they claimed that her female college student subjects were likely more similar to men than the average woman. Those reactions must have been extremely frustrating for her, which is evident in an article she wrote several years later.      In her review about recent literature on the psychology of sex. Psychological Bulletin, 7, 335-342., she stated, "There is perhaps no field aspiring to be scientific where flagrant personal bias, logic martyred in the cause of supporting a prejudice, unfounded assertions, and even sentimental rot and drivel, have run riot to such an extent as here" (Thompson, 1910, p. 340).
Although still interested in the psychology of sex, she moved on to work for the Women’s Suffragette Movement and concentrated on the psychology of children, and their education.
Aside from all of the pioneering work she did, I think a great deal of her relevance to the psychology of women is also reflected in her life. The perseverance needed to hurdle the prejudices toward women back then was enormous. That effort seems to have taken its toll on her toward the end of her life. She was betrayed by the very men who had, in one way or another, vowed to be her supporters. 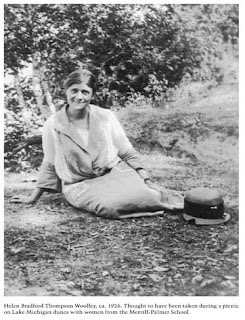 Her husband left her in 1923, and eventually married a younger woman. Dean Russell, her supervisor at Columbia, betrayed their agreement of continuing her work. Angell, her first mentor, also betrayed her when she asked for his help to find work. After communicating with Russell, Angell felt she was not fit to hold a strenuous teaching job. In her autobiography she explained Russell’s betrayal. "The promise was, of course, not put into writing. Such promises rarely are. It was in the nature of a gentleman's agreement." However, "when one party in a gentleman's agreement is a woman, with no written evidence of the agreement, it counts for little. That I did not understand at the time."
I found that quote to be a fitting statement to the struggles she faced and overcame as a scientist of great importance to the field. Imagine what she could have done, had she the same unbiased support the men of her time enjoyed.
Works Cited
Rodkey, E. (2010). Profile of Helen Thompson Woolley, Psychology's Feminist Voices Multimedia Internet Archive. Retrieved from http://www.feministvoices.com/helen-thompson-woolley/
http://historyandschoolsfall2011.wikispaces.com/Erin+Karalus   accessed 9/16/12
http://www.webster.edu/~woolflm/wooley.html   accessed 9/2/12
Images
http://www.findagrave.com/cgi-bin/fg.cgi?page=gr&GRid=12912
http://www.kdp.org/meetourlaureates/laureates/helenwoolley.php
http://maedchenmannschaft.net/wer-war-helen-thompson
Donnis Kempley
Psychology of Women, SUNY New Paltz
Prof. Melanie Hill
September 17, 2012
Posted by Unknown at 10:52 AM