Anne Anastasi
December 19, 1908- May 04, 2001
Background Information
My psychologist of the week is Anne Anastasi. She was born in New York City on December 19,1908. Her parents were Theresa Gaudiosi Anastasi and Anthony Anastasi but unfortunately, shortly after Anne turned one her father passed away. During this time period, it was not common for a woman to raise a child without a father, but Theresa made it possible. With the support from Theresa’s mother and brother, they helped raise Anne. Theresa was an educated woman with a college degree, but according to Webster.edu, after her husband passed, she was not prepared for the work force. With that being so, it was leading them to financial struggles. She ended up teaching herself booking keeping, opened a piano shop, but when that wasn’t successful, Theresa worked for the largest foreign newspaper company in New York City (Webster.edu). Thanks to Anne’s grandmother, she hired a schoolteacher and the both of them helped home school Anne up to the age of 9 (Feministvoices.com).
Education
During Anne’s short time span in grade school, she began her education in the third grade and ended up advancing to the sixth grade in just a short period of time. Just after two months of high school, she dropped out at around the age of 12. She was “unaware of traditional sex role stereotypes,” highly dissatisfied with the over populated classrooms along with the low academic standards they held for the students (Feministvoices.com, Webster.edu). Looking for a new challenge, Anne enrolled at the Rhodes Preparatory School in Manhattan and after two years, she was eligible to apply for Barnard College, which she was accepted at the age of 15 (Webster.edu).
Originally when Anne entered college, she thought she was going to major in mathematics, but after being a student in Harry Hollingworth’s class and an article she read by Charles Spearman, Anne was a changed woman and chose psychology (Feministvoices.com). Anne graduated college in 1928 and attended Columbia University to complete her graduates, which she completed in two years by the age of 21, earning her doctoral degree (Feministvoices.com). During graduate school, Anne met her husband John Porter Foley Jr., an industrial psychologist; they got married in 1933. A year into their marriage, Dr. Anastasi was diagnosed with cervical cancer which led to her being sterile and unable to have children. According to Feministvoices.com, “Anastasi believed this fact contributed to her professional success, since it freed her from the complications of motherhood without a difficult decision that might have left her conflicted.” 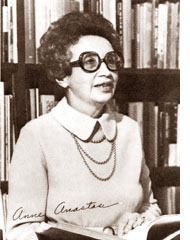 Career
During the same year that Anastasi earned her doctorate degree, the economy was in harsh times due to the stock market crashing (apa.org). In 1930, Anne’s old professor Harry Hollingworth helped her get a job at Barnard University as an instructor, where she worked for three years. Although the great depression was in full effect, that did not stop Anastasi from pursuing her research. Thanks to the National Youth Administration and the Works Progress Administration, she was able to recruit research participants and begin her studies (Apa.org). By 1939, Anne worked at Queen’s College of the City University as the chairwoman of psychology. Although that was a big step for her career, she was not satisfied with her employment there because she felt she didn’t receive the proper support from her department along with many disagreements among the coworkers, which led to her dismissal of the job by 1946 (Apa.org, Webster.edu). By 1947 Anastasi started her new job at Fordham University and stayed there until her retirement in 1979.
Accomplishments
Anne Anastasi has had many accomplishments in her lifetime, she wrote her dissertation on psychological traits in 1958 and “challenged the psychological community to drop the “nature vs. nurture” debate” (Feministvoices.com). This led to the field’s name being changed from being called “individual differences” to “differentially psychology” (Feministvoices.org). According to The New York Times, Anne always thought of new ways on how human behavior could be analyzed and studied; earning her the nick name the “test guru”. Anne was a big contributor to psychometrics and 3 of her books were published; which still used to this day in classrooms. Her book called Psychological Testing was turned into 7 editions (Apa.org). Anne is best known for her contributions she made towards “research, teaching, textbook writing, and organizational leadership” (Webster.edu). According to Women of Psychology, some of Anne’s honors include being the president of multiple associations and received many awards in her career. Anne passed away in her home in New York City on May 4, 2001. 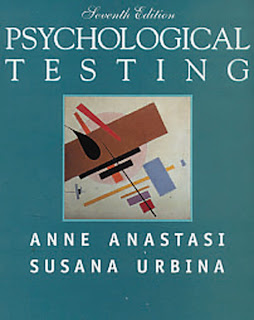