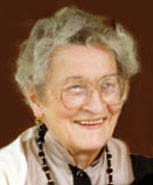 
Mary Ainsworth was born in Glendale, Ohio in December of 1913. She was the oldest of three girls and both her parents graduated from Dickinson College. When Ainsworth was five her family relocated to Canada after her father was transferred at a manufacturing firm. Ainsworth’s parents placed a high emphasis on education and weekly trips to the library were a regular event for her family. When Ainsworth was fifteen she became inspired to become a psychologist after reading the book Character and the Conduct of Life by William McDougall.


After completing her PhD, Ainsworth taught at the University of Toronto until joining the Canadian Women’s Army Corps in 1942. During her time in the Army she received the rank of major and administered tests, interviews, and conducted counseling. After returning from the Army, Ainsworth continued to teach at the University of Toronto where she met her husband Leonard Ainsworth, they married in 1950.


After she was married Ainsworth and her husband moved to England so he could finish his graduate degree at University College. Ainsworth joined the research team at Tavistock Clinic in England this is where she began her research along with John Bowlby on mother-child relationships. Ainsworth continued her research on mother-child relationships while living in Uganda after her husband accepted a job at the East African Institute of Social Research.


After spending two years in Uganda Ainsworth moved to Baltimore, Maryland after her husband accepted a job as a forensic psychologist. Ainsworth taught at Johns Hopkins and provided psychological service at Sheppard and Enoch Pratt Hospital. Ainsworth and her husband divorced in 1960 but she continued to teach at Johns Hopkins until 1975. After 1975, Ainsworth relocated to Virginia and began to teach at the University of Virginia until her retirement in 1984. She died in Charlottesville, Virginia on March 21, 1999 at the age of 86.


Application to Psychology of Women:


The work of Mary Ainsworth is relevant to our class because she was one of the first people to examine mother-child relationships. She was the first woman to attempt to explain how the mother-child bond could affect their children later in life and defined what a secure bond is between a mother and child as well as various negative attachment styles. Although Ainsworth said that her work could be depicted as encouraging mothers to stay at home during children’s early years to ensure secure attachment to their child, she was sure that alternative arrangements to stay at home mothering could also create secure bonds with children as well.


http://www2.webster.edu/~woolflm/ainsworth.html
Posted by Unknown at 8:15 PM