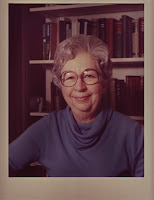 Eleanor J. Gibson was born on December 7th, 1910 in Peoria, Illinois - the daughter of a businessman father and an unemployed mother. Though Eleanor’s mother didn’t work, she had impressive academic credentials and had studied at Smith College. Following in her mother’s footsteps, Eleanor enrolled at Smith and found herself drawn to psychology courses. Midway through her undergraduate studies, Eleanor met JJ Gibson, a young experimental psychology professor. The relationship that followed had a profound impact on Eleanor’s life, as she attended a master’s degree program supervised by JJ. Midway through, the couple married.

As Smith College didn’t offer a PhD program, Eleanor attended Yale for her doctoral studies. Gibson’s goal was to conduct research under the supervision of Robert Yerkes, a professor of psychobiology known for his pioneering work in primate behavior and language. Unfortunately, Eleanor was met with the misogynistic viewpoints that permeated higher education at the time. Yerkes, as he claimed, “would have no women in his laboratory”. Determined to continue, Gibson worked under behaviorist Clark Hull and was finally awarded her PhD in 1938.

With the outbreak of World War II, Eleanor’s husband JJ was contacted by the US Air Force. The government needed his help creating a battery of perceptual tests that could be administered to pilots. Eleanor found herself caring for the couple’s children until the war ended, when her husband was offered a teaching position at Cornell. At the time, the school’s policies dictated that married couples could not be faculty members(due to fears of nepotism), denying Eleanor a position equal to that of her husband. As a research associate, Eleanor ran experiments with military pilots that measured distance judgments. Due to her position, however, she was not given a lab of her own in which to work.

Eleanor Gibson’s most significant experiment was known as the “visual cliff”. Conducted in 1960, the results shown by the visual cliff study offered new insight into the processes of visual perception. In this experiment, a table was covered with a checkerboard pattern. Attached to this table was a piece of transparent plexiglass with the same checkerboard pattern placed underneath it. Next, babies were placed on the table and allowed to crawl around. Although these children had just learned how to crawl, Gibson noticed that they would consistently avoid crossing from the tablecloth to the plexiglass. Even when their mothers were coaxing them along, the babies refused to walk off of the “edge” - despite having no prior experience with cliffs. This illustrates that humans are capable of basic depth perception by the time they can walk. Further “visual cliff” experiments with babies around 1 year old showed that the children were more likely to walk onto the plexiglass if their mothers had a reassuring, smiling face. By looking for their mother’s expressions, the babies were utilizing “affordances” - information provided by the environment and used to support perception. 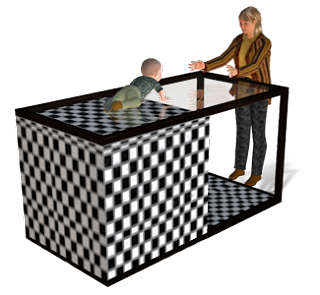 An artist's rendition of the "visual cliff" experiment.


After spending nearly two decades in a research associate position, Gibson became a professor at Cornell in 1965. Four years later, she published Principles of Perceptual Learning and Development, outlining her theories of perception with regards to affordances and other characteristics of perceptual learning. Gibson’s book helped flesh out the relatively young field of perceptual development and was considered a classic.  Later on in life, Gibson also published An Odyssey in Learning Perception, amongst other works.  The scientific community recognized Eleanor’s achievements by awarding her the G. Stanley Hall Award, the American Psychological Foundation Gold award for lifetime achievement, as well as the prestigious National Medal of Science(an honor that few psychologists have ever earned). At the time of her death in 2002, Eleanor Gibson’s work had left a mark on not only the study of perception but on psychology as a discipline.

Though Eleanor Gibson lived a life characterized by great success, she was also subjected to the androcentric, anti-feminine ideals common in the scientific fields. Her outright dismissal by Robert Yerkes is indicative of the sentiment shared by many at the time - that women had no place in scientific research. Though Gibson was able to obtain a doctorate degree, she was forced to study under a vocal supporter of behaviorism - a theory that she did not subscribe to. A man in Eleanor’s position, however, would not have faced such scrutiny and most likely would have been free to pursue research as he saw fit.

This discrimination also extended to Gibson’s career at Cornell, where she occupied a lower position than her husband simply because they were married. Though Eleanor was denied a lab to work in, her research projects(even the famous visual cliff experiment)were all designed to compensate for these shortcomings. Eleanor not only persevered in the face of the obstacles created by gender, but flourished - making her groundbreaking strides in perceptual development even more impressive.