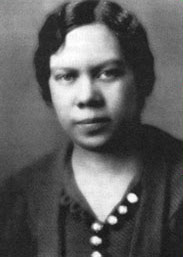 Ruth Winifred Howard was born on March 4, 1900 in Washington DC. She was the youngest of eight children. Her mother was a school teacher in a one room school house before marrying her father, a Protestant minister, and becoming a mother and housewife. As a young girl, Howard found her greatest interest in books. As a child her dream career was to become a librarian, but after volunteering in a library she changed her mind. It was her father’s place in the community and his attitude toward people which eventually inspired her to study and get involved with social work.
In 1920 she enrolled in the social work division of Simmons College in Boston. She graduated in 1921 and began her practice of social work in the Cleveland urban league. She was then offered, and accepted a job with the Cleveland Child Welfare Agency. It was here that she began her work with dysfunctional families and foster children. Working with these children, she came to discover the problem with those who didn’t sympathize with other cultural groups aside from their own. This was what initially sparked Howard’s interest in psychology. Eventually, Howard’s area of psychology mainly focused on child assessment and therapy, developmental psychology and nursing education.
Howard applied for a Laura Spelman Rockefeller Fellowship and won. She then enrolled in Columbia University’s Teachers College and School of Social Work from 1929 to 1930. She also took classes in psychology.  After her year in Columbia, she transferred to the University of Minnesota's Institute of Child Development. She completed her doctorate here in 1934. Following her scholarly achievements here, she registered at the Institute of Child Development. Howard followed under her supervisor and mentor, Florence Goodenough.
Howard doctoral research consisted of a nature-nurture study, focusing on the developmental history of 229 sets of triplets. These sets of triplets ranged in age from early infancy to 79 years old. It was eventually published in 1947, in The Journal of Genetic Psychology. After her graduation from the University of Minnesota, she married Dr. Albert Sidney Beckham, a fellow psychologist, and moved to Chicago where he was practicing his work.
After moving to Chicago with her husband, she accepted an internship at Illinois Institute of Juvenile Research. This prepared her for her clinical work with children. It led to her work in a community hospital and state school for delinquent girls. She also became a supervisor at the National Youth Administration and eventually started a private practice with her husband. Her husband Albert passed away in 1964 and Ruth Howard died in Washington DC on February 12, 1997.